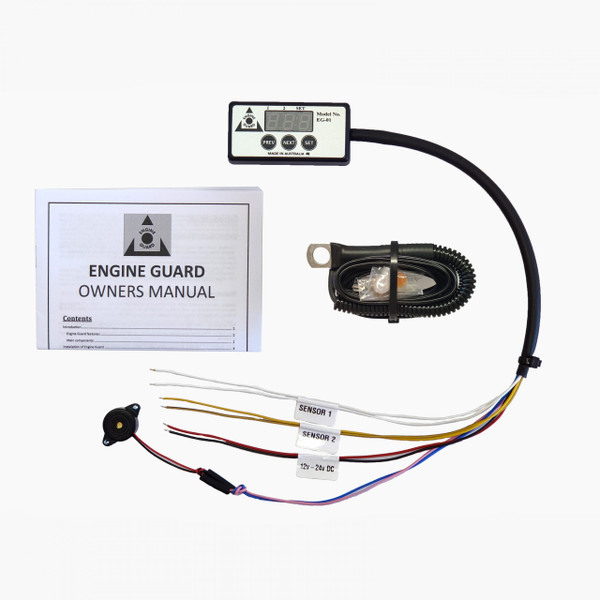 ENGINE GUARD is an advanced digital temperature gauge with a user-adjustable audible alarm. This system gives you the ability to monitor and alarm the temperature of any 1 location on your vehicle.

NOTE - Low Temp Alarm Equipped - If the sensor detects a temperature below freezing (32F /0C) then it will also trigger the alarm. The alarm can be silenced for up to 100 seconds by pushing the "SET" button and for engine installations, the engine will warm up above freezing very quickly. Future Engine Guard models will not have the Low Temp alarm so keep this in mind if you live in a cold climate where this alarm might be too annoying and you might instead choose to wait for the revised model.

How does ENGINE GUARD work?

The ENGINE GUARD system is an advanced digital temperature gauge with a user-adjustable audible alarm. Designed to warn you of overheating, the system will also provide very accurate real time monitoring of changes in temperature. Many owners report that they are surprised to see significant variations in engine temperature- whereas the factory temperature gauge hardly moves. This is because most factory temperature gauges only show LARGE temperature changes- typically in three stages being ‘COLD – NORMAL – OVERHEATING’. Actual engine temperatures can change between 180°F and 220°F and the factory gauge's needle may not move at all! This is designed to give you ‘peace of mind’. Unfortunately, it can also go from “OK” to “OVERHEATING” in seconds- causing expensive engine damage. ENGINE GUARD will warn you before the damage is done!

With ENGINE GUARD you can monitor small changes in temperature- and take action. And the changes are detected very, very quickly. For example, on most vehicles an ENGINE GUARD will react to starting from cold in under 40 seconds. By contrast, most factory gauges take several minutes! And the ENGINE GUARD is remarkably good at detecting temperature changes due to load. As an example, we recently completed a test: a Toyota Prado was used to see the impact of tire pressure on engine temperature. The test revealed that at 60mph and 30psi tire pressure the display showed 241°F but at the same speed and 40psi, the temperature drops to 233°F. So you can adjust your driving style using accurate feedback- (for example, change to a lower gear or slow down) if you see a gradual rise in temperature- particularly if towing.

Importantly the system uses a temperature sensor located directly on the metal of the engine– usually located on the cylinder head, on or near the thermostat housing. The sensor is installed like a washer under a bolt- quick and easy! And cylinder head temperature is a very accurate predictor of overheating- after all, this is where the combustion takes place. In testing, we have reliably demonstrated that if an engine has a sudden loss of coolant, head temperature will start to rise within 20 seconds. As the alarm set point is usually set around 6–10 °F above the normal highest operating temperature, it will give a very accurate and timely warning. Equally, unlike traditional ‘immersed in coolant’ type temperature senders (as per most manufacturers) if you suffer a sudden catastrophic coolant loss, the ENGINE GUARD will still function perfectly. By contrast most factory gauges will DROP in temperature if there is no coolant- effectively telling you the wrong thing! The ENGINE GUARD will also show accurate temperature if the coolant is not circulating (such as a stuck thermostat or failed water pump) whereas immersed senders would fail to show any change.

The digital Display is designed to be simple to install and easy to operate. The Display mounts on the dashboard (only 19mm thick) and can be located anywhere that suits the driver. It uses a high bond self-adhesive backing so no need to drill or cut into the dash. Operating the Display is simple- the system records the highest temperature in the memory making setting the alarm a breeze, and this alarm set point is displayed on start-up as a reminder. It also features multiple error warnings if faults exist. There are also 11 adjustable parameters to allow you to customize the system to suit your exact purposes, from display brightness, to alarm delay and reset times, degrees Celcius or Farenheit, and more.

Proudly Made In Australia - So don’t delay- ENGINE GUARD today!

Installation Guides
*These links may contain independent information and are not a substitute for the Factory Service Manual procedure - use at your own risk.